I knew Owen while I was at law school.  Later I heard that he had done a typical days work, where he put in some voluntary overtime so he could share money with someone in need, had stopped by the widow next door to fix her porch and then had gone home where he was shot to death by police officers in his own kitchen.

Obviously there was more to the story.  Owen had been in an automobile accident and suffered brain trauma which resulted in mental illness.  The medication that the Court had ordered had side effects he found hard to tolerate.  The orders had expired.  A judge had reviewed things, the mental health system had approved a much more effective drug that also has dramatically less intrusive side effects (though it costs a good deal more) and issued an order.

The police were just there to carry it out.  Owen, who had been a world class martial artist (as in competing internationally and winning) dropped to officers in two seconds and the others who were just not prepared for what actually happened, shot him.  If he had not, they would have all died.  It was the mental illness, the paranoia.  Owen in his right mind would have shot himself rather than see a peace officer die.

I was watching a movie about mental illness and I thought of Owen.  Interestingly enough, of course, the Soloist of the title does not recover.  He is not necessarily better off at the end of the book.  There is some preaching, but without much of a point. 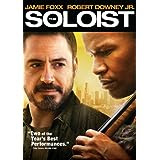 There are many mentally ill homeless who would rather be on the streets than in residences or mental health facilities.  The movie captured that well (for example the cameo by the character who says: "when I take my lithium, the voices go away, but when I'm not feeling well, the voices comfort me, and they aren't there for me when I take the lithium").

How much do we respect those decisions?  How do we deal with the collateral issues (homeless camps are scenes of a great deal of violence and crime)?  How do we deal with the fact that we can not force results (I was impressed with the character who pointed out, when the author/editorialist was demanding that something be done, that all of the people in the room had already been diagnosed, prescribed treatment -- that wasn't working -- so he was doing what he could that did work).

Haunting story, based on a true story.  Owen's story is more telling, at least because I knew Owen, cared about him as a friend, was there at his funeral, worry about his wife, his children and Talo (his brother) and miss him still.

Without any easy answers.

A touching tribute to your friend.

This is an area where we who have covenanted have a chance to step up and mourn with those that mourn and comfort those who stand in need of comfort.

There are not easy answers, especially in a world that is increasingly intolerant of government involvement in any social program or assistance. Treatment of and for the mentally ill continues to be woefully underfunded; services are difficult to receive and often require a maze of requirements that are difficult for a fully competant person to navigate, let alone one who has mental illness.

Newer meds with fewer side effects (for some) are becoming available, but state limits on funding for medication or development of formulary lists for use in state-funded care ignores that each person's response to meds is unique -- it often takes years to find the right cocktail of meds that can help a person to feel more normal -- meaning how they felt before the onset of the illness (and of course some never do).

Sorry for the long response. You hit just a little nerve.

This is such a terrible story and I am so sorry for your loss. I can't comment as knowledgeably as Paul, but I have to say that I was really struck by what you asked about respecting their decisions. The only answer I know to that question is that our culture respects only one decision--the one to take medication. There's very little understanding of the fact that for many people the medication is worse, and very little understanding of the issue in general. It's a terrible situation for anyone involved.