Missing things I never had ...

I'm half Greek.  I know, I'm blond, but so were the "fair haired Achaeans."  I have a grandfather and a grandmother who were both born in Asia Minor.  But my mother was estranged from her family, something with her dropping out of college and catching a train to run off to California to marry my father.  I met my grandparents only once.  My uncle died young, I only met one aunt through letters, the other once when they were in New York.

My father was in the U.S. Air Force.  We traveled a great deal.  My brothers and sister had some time in California where they were able to meet other family members (such as my great aunt who was like a second mother to my parents), I only got to meet my aunt and uncle (it is from my catholic Aunt Mary that I have such fondness for Catholics).

My grandfather traveled a good deal, even after he was retired and sent home to die.  He thought he would make the most of it until death took him.  He later told my brother if he had realized he wasn't going to die shortly, he would have made a second career of the time he ended up having left.

We saw them on occasional holidays, but usually we were out of reach due to time and distance, as were they.  I remember visiting them fondly, and writing back and forth, but my grandfather's greatest professional strength was also one that led to problems in prolonging discourse.  He could not express himself directly.  To learn what he thought you would answer his questions, what you believed afterwards was probably close to his opinion.  If you lacked the base knowledge to work with, he had a very difficult time communicating, even the simplest of things.

I read posts and remembrances, such as http://timesandseasons.org/index.php/2011/12/theotokos-lands-end/ and I miss having a culture.  My mom quit speaking Greek for World War II as part of being "American."  She never spoke it with us.  My dad taught us "oh, you were born in a boat" but then thought better of teaching us more Greek.

"Home" was southern California of my father's youth and the beaches.  His dream was to retire to the empty high desert of his childhood days when he found freedom and emptiness there.  So he retired to Lancaster, which had over a hundred thousand people and was not that empty.  His post Air Force employment was disrupted as the Air Force refused to let him retire on schedule, and he ended up working for government contractors.

That meant my parents could not attend my wedding (unable to get exist visas).

He and my mom then started serving missions.  So, they made one funeral, missed others.

We had them briefly, living down the street from us in a home we helped refurbish, but my father was in the end game of Parkinson's' Disease then.  I had time with him, as I would help him exit the bath (he could not do it himself and my mom was not strong enough), and as we talked some, but it was not time with him fully present.

My mom could not take living in the house after he died, and so sold it and moved.  Now she is serving another mission.  Worked through some phone problems, now we can talk from time to time.

But my children do not have the same grandparent experiences.  Myself, I feel such a void where my grandparents should have been.  I feel I have a heritage, but all that I have from it is short height and strong calves.

So, on this New Year's Eve, I find myself missing things that I never had, but missing them anyway and in a way, missing myself.

When Win and I were engaged, I visited her family for Christmas (my parents were in Saudia, unable to get exit visas).  Her mother had tried a change in the way she made chicken, going from fried to breaded and my father-in-law to be did not like it.

So, we offered to go get some KFC.  We drove what seemed to be forever and no KFC was available in Walnut Creek or the environs, but we came across a Chinese Restaurant.  We used a pay phone (remember those?) and called back, asking if Chinese food would be a good substitute.

It was, so we picked some up, came back and had dinner.  Win and I then read the Christmas story from the Bible together.  Every Christmas Eve we now have Chinese food as a family tradition, except the one time it turned out that the Chinese restaurant in Chewelah had closed, and there was none to be found, so we bought KFC (!it was open in a neighboring community!) and brought it back, along with some Chinese food from a Wal-Mart.  The joke was that we had come back with the promised KFC, only about twenty-five years late.

A carol for the season.

A carol for the season
Posted by Stephen at 6:09 AM No comments:

Lessons from Job, Comforting those who Mourn

Job has some wonderful lessons.  For example, Job's sufferings are not complete when he loses all of his possessions.  They don't reach a fullness when his children die.  No, as he sits in the ruins of his house, covered in ashes and using a potsherd to scrape the boils from his body, his suffering reaches its peak when his home teachers show up to badger him into submission.

Doesn't everyone know that when you have grief or sorrow, what your life really needs is someone to shout at you?

Of course what they are really doing is trying to make sense of Job's problems.  They want:
To do that they are quite willing to increase his suffering, accuse him wrongfully, ignore the truth and mock God.  Which is why when God speaks from the whirlwind at the end, he condemns the so-called friends.

It is useful to compare the "friends" to a typical sister dropping by a meal packaged up so that there is nothing that needs to be returned.  Quick stop, a kind ear, food, and maybe a second sister with her to take turns with children or light cleaning while the other sits and listens.

Not that there are not women in the Church who act like men.  And not that there are not Riley Scott type men (he doesn't read blogs, so I can talk about him.  But I'm sure, when Christ comes, Riley will be there still helping people. I find in him a role model for many things I should do so much better) who drop by, fix things that you did not know needed fixing, and let you know that they care.

But when I think of someone shouting at someone in grief or sadness that they have it wrong, doing their best to drown out the world and badger the sad, the lonely or the grieving into submission, I think of men or manlike women.  Guess I'm falling into stereotypes, since I don't think of the slimy, backstabbing gossip types as necessarily female.  The one I wrote a poem for was a man.

I'll rethink that (the don't act like a man in giving advice and comfort).  Maybe I can find something to criticize in Job's wife to even it out.

I think better is to think about, and suggest, that more of us act like a real man, like Riley Scott.

I know I had a series about how we all can't be like Jack Green or others.  But you know, we can all be more like Riley Scott.

And that is a good place to be.
Posted by Stephen at 7:08 AM No comments:

I go to thinking about the Christmas I bought a small live tree, Heather Nicole Marsh kept it in her room and Allison Del Rio made ornaments out of the foil covered Reeses Peanut Butter Cups they have for Christmas. We've a tree and some decorations out, but emotionally, it feels like it did then this year.

I've been asked to do a manuary post on grief and related topics, couldn't sleep Friday night/Saturday morning.  But I got it out of my system today and into rough draft.

This is the time that it is, no other.

Posted by Stephen at 9:40 PM No comments:

Michael Lyons got my attention years ago with some of his research and work. It was almost in parallel with Nibley (and yes, Michael did end up illustrating some of Nibley's work, so they drew together a bit over time). 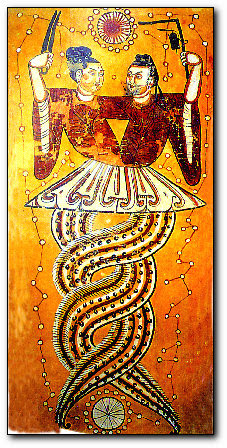 In the underground tomb of Fan Yen-Shih, d. A.D. 689, two painted silk veils show the First Ancestors of the Chinese, their entwined serpect bodies rotating around the invisible vertical axis mundi. Fu Hsi holds the set-square and plumb bob … as he rules the four-cornered earth, while his sister-wife Nü-wa holds the compass pointing up, as she rules the circling heavens. The phrase kuci chü is used by modern Chinese to signify “the way things should be, the moral standard”; it literally means the compass and the square. (Temple and Cosmos pages. 91-132 at page 115)


There is a good deal more on the topic, though not Michael's research, at:

I also ran across the original printed volumes of


Originals are a little pricy:

Expand See Book Details
But fascinating.  Ward was a colonial official and a Mason.  He joined the Triad lodges in Hong Kong, and then, when the British made them illegal, participated in confiscating their material and regalia.  He felt no remorse at publishing a three volume set on their rituals, which I later reworked as a heroquest for a project I was working on.
Posted by Stephen at 9:46 PM No comments: