It was seventeen years ago, yesterday, that she died. I couldn't find the words to write about her all of yesterday. Now I can.
Posted by Stephen at 7:45 PM 3 comments:

We watched Glee as a family this week (the retelling of the Dr. Seuss story episode).  Most television I've watched this month. Part of it was the "hero" of the show talking about how early memories of Christmas ruin the future for us by creating so much magic and wonder that nothing can ever again reach that benchmark.

It made me think, though, how for some people, the first Christmas they remember might be so bad, nothing can ever fall short of the benchmark it sets.  All Christmases are better, not worse, often far better.

Which is why I feel so bad for my oldest daughter. The first Christmas she remembers is the one Jessica got sick over, the second, the one where Courtney died on December 26.  Makes this time of year hard to live down, but in a very different way from someone always striving to regain the magic of childhood.

Heather has been a trouper, though.  When no one else was up to a Christmas tree, she had one in her room, decorated with ornaments made from foil candy wrappers and the help of our babysitter. She is a great kid, and I wish her better memories for the future, each and every year.

As for Rachel, I'm not sure we will ever top this year, I don't expect to ever buy her a first pony or anything like that for the future.
Posted by Stephen at 11:39 PM 2 comments:

I had a post about Mormons and Feminism at Wheat and Tares.
It occurred to me, after the funeral, that Krista Oakes made a perfect coda to the essay.
On the one hand she ran her own business, was twice the keynote speaker at the FDA/Industry annual conference for her industry, composed music and lived her own life.
On-line she was at:
If you asked her to define herself, she would say: Gas pump virgin, conservative Texan, adoptive mommy to Jacob and Emma (world's greatest kids), small business owner, Mormon, diva, Leo, pampered wife, bookworm, author, clog dancer, third-generation insomniac, cookie monster, karate black belt, brain cancer survivor, and more - all rolled up into one tired but lovable bundle.
More is the loss to LDS feminists that people like Krista could not find a home with them.
We made it to the funeral, though Win had to take more pain medication to make it through (she is still post surgery, no lifting, will be off work for six more weeks) as it went almost two hours.  I found myself admiring President Mills very much, and, of course, respecting Krista even more.
She will be missed.  The ward program for Sunday had her doing two solos, in case anyone wondered how much of a surprise her death was.  She will not be easily replaced.
Posted by Stephen at 7:09 PM 4 comments:

Win's surgery went well. Love her so much. Scott & White is nice enough, but I am glad we will not have to be coming back.
Posted by Stephen at 12:01 PM 1 comment:

The new blog is:  http://www.jrclswomen.blogspot.com/

The old link is to a collection of old family "Christmas" letters:  http://adrr.com/living/family.htm

Now for the letter to my mom I need to send her:

One thing I hear over and over again is people complaining that their parents never would sit down and talk.  Or stand and talk.  Or talk at all. Saturday I got to thinking about that.  One thing you have always done is to be willing to sit and talk and to listen.

You would listen intelligently to anything.  When I was learning calculus and special relativity, you would listen and understand and talk with me about them.

At the time I did not realize that most moms would not do that (and could not, come to think). You did.  Any time.  Every time.  You and dad both took time for a hug, to tell me you loved me and to spend time.  And you, you were always willing to take time to listen.

I wanted to write you and just tell you that I appreciated that.  Not only do I love you, I am grateful for you. I just wanted you to know.

Steve.
Posted by Stephen at 3:03 PM No comments:

A dear sister in our ward died last night, leaving two pre-school age children behind.  She had just finished one more course of chemotherapy, was pain free in the area being treated and was scheduled for another MRI on the 15th to check to see if the glio had spread beyond the treatment regimen.

I do not know what to say.  Obviously it had.  She will be missed.

Strange, I've been thinking about becoming more invested in life, and I how I need to avoid avoiding that.

We were invested in Krista, Win more than I.  She will be very missed.
Posted by Stephen at 8:33 AM 2 comments:

Something different, with fiddle player, for Christmas music

I subscribe to a military information list.  Usually it has stuff that appeals to game designer friends of mine (I call it science fiction meets reality).  For the most part, they are hard core, hard combat types (who else gets to test drive real weapons systems like grenade launchers that fire mini-grenades out like machine gun rounds).


Interestingly enough, the latest they were pushing was both dropping DADT and providing spousal benefits to the spouses of gay service members.


Of course their readership was all over the map.  As far as I can tell, if someone serves with someone they know is gay, they don't care about gays in the military, combat or otherwise.  If they have not, or are older (from the era of predatory male/female interactions in the military), they are hostile to the idea.  And the Air Force doesn't seem to care at all -- kind as if they were a non-combat branch.

The easy transition is to allow gays to be "out" any place or spec that women have.  That avoids the front line combat unit issue (the only place with a lot of resistance), yet ensures that everyone will meet gays. Probably take a year and DADT would dissolve of its own weight and experience.

So, repeal DADT for the Air Force and Navy, repeal it for all Army "non-combat" roles (everywhere women are currently allowed to serve) and punt on the Marines.  Get ready to repeal the entire thing in 12 months if it goes as expected.

Now I did have a friend tell me that gays are too valuable to risk in combat or the military, but that point of view aside, I think everyone else's issues and needs are met, with a rational transition, and a chance to pull back if it turns out there is something dramatically wrong with the idea vis a vis combat arms that recognition won't cure.

Yes, that means mixed status for a while, but this is something that should have/could have been begun a while back.  The sooner begun, the sooner a mess is behind us and the military's combat effectiveness is not diluted by distraction or politics.

Or that is my current thought.  Let me know where I am wrong.
Posted by Stephen at 8:13 PM No comments: 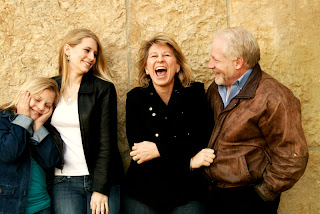 Hello and Merry Christmas
We are happy and enjoying life in Texas.  Rachel turns 11 just before Christmas and is enjoying sixth grade. Heather is 22 and has one more year to go to graduation in manufacturing engineering. Win still puts people to sleep (and wakes them back up again) for a living, and Steve is still an attorney with St. Paul Travelers.  We are still in Plano with Vinnie the cat and five chickens.
Other than Win facing down a hawk to save the chickens, the most exciting thing we did this year is we went back to peppers in the garden.  Many of you have heard the story of how we accidentally cross-pollinated a crop of peppers.  No one is sure what happened, but touching them would give you a chemical burn and eventually we had to throw them out since they were just too dangerous -- even for a practical joke.
This all happened before Rachel was born. The story has become a thing of legend in our home.  We still have a garden. And every year, as we pick out what we are going to grow this year, Rachel asks for a small plot for herself.   And every year, Rachel tries to recreate “The Year of Dangerous Peppers.”  This year Rachel planted jalapenos, bell peppers, anaheims and tabasco peppers.
There was no cross-pollination, but we did end up with a huge crop of peppers.  So, we tried to do something with the peppers. Anything.  Everything. We even began taking peppers to work. Alas, even co-workers would only take so many. It was almost as if we had zucchinis.  We tried a lot of cooking with peppers.  Still too many peppers.
Rachel tried a “Lemonade and Organic Peppers” stand. She managed to sell a lot of lemonade, but not so many peppers.  In desperation, she started making people take peppers when they bought a drink.  That unloaded a few peppers .. And she raised $27.00 for Vest-a-Dog – a organization that provides bullet proof vests for SWAT team dogs.
One day, Win came up with pepper relish and pepper jelly that was good.  Wow good.  Really good stuff.  We have discovered a great new food item and a easy way to use more peppers.  Suddenly, we don’t seem to have enough peppers. The relish goes fast at our house.  We even made some of Win's special cranberry ginger jam to distract people who were coming by for the pepper jelly.
We hope that this holiday season finds you healthy, and safe.   We wish you all the joy and blessings that life and this season holds. And expect to be receiving peppers from us.
Love,
The Marsh Family
Steve, Win, Heather, and Rachel
Posted by Stephen at 8:29 PM 1 comment:

Tithing settlement: 2 minutes on tithing, 20 on a sermon

Since it was very inspiring, it touched everyone in the family, I'm grateful he did it. It was worth the half hour delay in getting to our visit (the visits were going overtime and by the time it was our turn he was running a little more than half an hour late) and the extra time for the meeting.

The season is blessed.

Posted by Stephen at 7:01 PM No comments:

We got some wonderful photographs taken by a photographer in our ward. Seventeen of them turned out sparkling, better than I had expected. Here is one of them. Just one more thing to be grateful for ;)