Ok, Norton Internet 2007 got to where it froze more than twice a week. I finally got AVG (an anti-virus, read about it on ZDNet.com) and installed it. I'm going to use the Zone Alarm firewall (I've used it before) and a couple of anti-spyware programs I've currently got.

Reading around I found out that Norton has gotten worse over time, and given I have a Windows XP Pro installation running, with all updates, and the updated Norton (a download from the site), it isn't too much to ask that I not have to uninstall and install two to three times a week ...).

Off to check the steaks. Rachel is reading the Dangerous Book for Boys right now, taking a break from Harry Potter novels.


Really neat stuff. She says it is too dangerous for boys.
Posted by Stephen at 3:35 PM 2 comments: 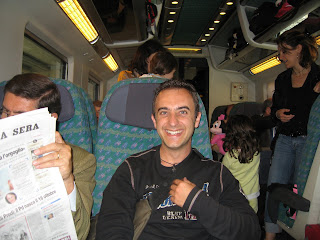 We met a lot of wonderful Italians, this just happens to be the one we got a photograph of.
Posted by Stephen at 7:46 PM 2 comments:

I am stuck with Norton freezing every time it manages to update itself without my permission. I don't mind the definition updates, but the other ones crash it. I've got the "improved" Norton 2007 running under WinXP Pro (fully updated). So, I end up using the custom uninstaller and reinstalling about once a week.

That cuts into my time for things like game playing or blogging.

But, I covered home teaching for two other people this last week, saw my mother safely home from the hospital (her surgery and hip repair went very well) and dealt with other things ...

Work has been busy. As a litigator, on vacation work just keeps rolling in (though I did clear off court and similar things for when I was gone).

I'll blog about vacation more. Basically, we got a free flight into Zurich and back home again, took second class train rides all over Italy, and used a lot of Rick Steve's guides.

(and, had a couple more we bought, but did not use).

We were gone from the 3rd to the 13th, spent four days in Cinque Terre with Egli, two days in Florence with another recommended hotel, and two days in Venice with a hotel my wife found on Hotels.com (rather than call around the recommended list) -- for $75.00 (not euros) a night, clean, new, and with delightful private bath and shower and a breakfast they cooked fresh every night (it was wonderful to come in to the smell of fresh baking every night).

I can't say enough good things about the company. I so enjoy my wife. Next time we are taking the kids with us. We ended up missing them so much.

Cinque Terre has a lot of trails, more stone in the terraces than in the great wall of China, though I joked that it was really the stair climbing of Italy event ... very pretty.

Venice was fun (cheaper food than Florence), and I'll have to upload some pictures of Win being swarmed by pigeons, not to mention some of the Italians we met -- they were delightful people. Though, I don't know what has gotten into them -- like the French they just are not smoking like they used to (great for me, I'm allergic to cigarette smoke).

We decided to skip Rome, which had been the original place we had decided to go in Italy. So instead of a Rome focused trip, we skipped it all together. On the other hand, we did Italy on the cheap, about what you would spend in the same time in Dallas, if you went there on vacation, though our street vendors don't sell silk ties.

Lost a pound and a half on the trip, have done my best to regain it now that we are home. Food was wonderful, but we walked a lot.

I updated from 2006 to 2007 since Norton pretty much no longer sells software, but instead one year licenses disguised as software. At the price, I thought it was worth it.

Well, before long, on an update, it broke. I checked the website, discovered that you now need to use a special uninstaller and they suggest you download and use an updated, not as buggy, version (that also distorted and lost registration information, though I eventually solved that).

Now it breaks regularly on updates, which results in a system that doesn't run right. So I have a folder with the new uninstaller and with the new download, requires fixing about twice a week.

Not a solution. I'm going to try either Computer Associates new anti-virus/etc. or go back to PC-Cillian.

At least my Mom's surgery went well and she is very cheerful. My hospital visits have been pleasant, though getting caught up at work has been time consuming (in law, the work just piles up while you are gone as if you were still there but saving the work the whole time).

FIOS was installed and broke Sunrocket the way the installer put it in. Now to try to fix that.
Posted by Stephen at 9:13 PM 1 comment:

Ok, delayed five hours past when we expected to be leaving the airport, so did I have dinner with my Mom anyway?

Sigh, did get to visit her in the hospital twice on Mother's Day. She'll be alright. They operate on Tuesday.

Other than that, it has been a delightful vacation. Honestly, other than the peso pizza, I like American Pizza better ;) -- though Italy seems to have gone from pan bread with some garnish on it (Pizza in Italy in the 1970s) to thin crust pizzas (pizza from Cinque Terre to Florence to Venice, with one exception) and pizza wraps (a wrap, but made of pizza). No pepperoni to be seen anywhere, usually the only meat topping was anchovies or ham.

I'll get more time, I'll blog on the stair climbing on Cinque Terre (which we really enjoyed), the street vendors of Florence (which we avoided) and how Venice was cheaper than Florence (cokes, gelatos, everything but silk ties were markedly less in Venice).

Right now I need to get ready to go into work and face almost two weeks of mail. But, I was caught up when I left ...
Posted by Stephen at 5:50 AM No comments:

I've not done any ADR in India, but I know some people who have.

Now, for those who have asked about programs in India:

Great to hear from you.

We (colleague Jim Coben and I) were in India for 3 weeks in February and March. We offered a Diploma Program in Dispute Resolution for 6 credits (Negotiation and Mediation classes) and about 1/2 dozen students are continuing in our London program this summer (arbitration certificate for 6 credits) and then using the combined 12 credits as 1/2 of our LL.M. for foreign lawyers...they will be here in St Paul in the Fall to complete the other 12 credits for the LL.M. It is really quite exciting and the students were so wonderful and engaged. Jim and I had the most terrific time with them. It is a nice way for the Indian students to get an affordable LL.M. from the United States with an obvious concentration (12 credits at least) in Dispute Resolution theory and practice. The other 12 credits includes International Law (and something else I am forgetting here at home!) and a possible mini concentration in IP.

That "we" is Bobby McAdoo and Jim Coben -- not anyone and Steve Marsh. Anyone with questions about ADR in India I'd direct to Bobby McAdoo or Jim Coben at http://www.hamline.edu/

Hope that answers the question that amita had.
Posted by Stephen at 5:47 AM No comments:

Well, tomorrow we are off, Win and I. Nephews, parents, children, they'll all be here, we will be there.

More blogging when we return.
Posted by Stephen at 7:08 PM 3 comments: