A [Past Due] Black-headed Gull (The Weakerthans)

February always finds you folding
local papers open to the faces
“passed away,” to wonder what they’re holding
in those hands we’re never shown.

The places formal photographs refuse to mention.
His tiny feet, that birthmark on her knee.

The tyranny of framing our attention
with all the eyes their eyes no longer see.

And darkness comes too early, you won’t find
the many things you owe these latest dead:
a borrowed book, that cheque you didn’t sign.

The tools to be believed with, beloved.

Give what you can: to keep, to comfort this
plain fear you can’t extinguish or dismiss.

February is always such a problematic month for me, this hymn, shared by another blogger, does capture the heart of the cold and dreariness, somehow.

I'm grateful, though, for hope that leads me beyond these things, that takes me me into the Spring, the return of life, the promise of Easter and the joy of the promise of the resurrection.

Children are such hope, such promise and such a salvation.

Is there a law school bubble?

Courtney would have been nineteen today, the 16th of February. Jessica would have been twenty-five on the 12th.  Robin would have turned fourteen later this year.  I have to admit, I am weak.  In many ways I am still completely undone by their deaths in the time between 1993 and four and a half years later. I tend to feel that much of my life has passed me by, washed away by death and loss and grief.

Some things heal me.  My wife's love.  The faith of others. Things beyond words. Grace that is beyond my ability to explain.

But real, tangible and so much my heart and life, the love of my wife sustains me.  Thank you.
Posted by Stephen at 9:25 PM 4 comments:

The impact of friends and the healing power of what is important.

I wanted to add something.  This last week was really rough. It started with some events that triggered many of my lingering grief issues.  Then I was dealing with them while my wife was out of town and we had one of those very rare times when grief hit us both at the same time (usually we are lucky enough to take turns so that we are able to comfort each other).

I had some dramatic hostility with a guest post I did for another blog -- it felt like people were being hostile just to score points without paying attention to what I was really saying (talking about my feelings and how it hit me, not about anyone's real motives).  Of course the scheduling for the post and when I had to interact with it got moved so that it overlapped a time of intense personal grief and pain for me.

But then, but then, I got to sleep in the same bed and hear my wife breath, feel her presence.  Saturday morning I've got a group of guys I spend some time with, an hour or so.  Been doing that for a while (and, of course, I have my wife to thank for pointing them out to me and suggesting I join the group).  I walked into the room and saw their faces.  The last of the pain and frustration just melted away.

Seeing them, seeing my friends, after being able to just sleep in the same bed with my wife and just know that she was there, made my heart feel so very glad.  It is hard to express. 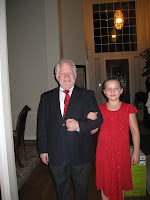 Then, that night, I had the Snowflake activity with my daughter Rachel.  Yesterday I was able to talk with my daughter Heather.  It is funny, just how important they are to me and how I've learned to explain that to them. Rachel told me that something I was explaining made her feel guilty.  I told her "I don't want you to feel guilty, I want you to realize how important you are."

Suddenly she smiled.  I made sure to tell Heather the same thing yesterday.  A wire transfer wasn't going to work right so my wife drove down to the bank, on two inches of ice (while I got ready to go into work since the office decided to open) to make a transfer between accounts in cash for Heather.  She did that because Heather is important to us.  I only told her about the details so she would realize that she was important enough for her mom to make sure that happened the right way.

But it is an important message, how important people are and that things are being done not because they've made themselves an inconvenience, not because they've resulted in sacrifice or discomfort for you, but because they are important enough that you are gladly doing things, be it getting up in time to meet with a bunch of guys drinking their coffee at 7:00 a.m. on a Saturday, or driving to the bank to make a transfer so things are not delayed, or dressing up for a girl scout activity.

Or staying awake to listen to someone breathe. 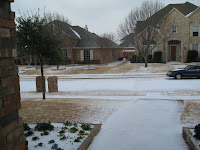 [Yep, that picture is what it looked like after the temperature went from 70 degrees to 19 degrees and the sky dropped two inches of ice on the ground with a dusting of snow. Was very slow going into work and the temperature dropped just a little more.]