Six ways to bring the Ensign Magazine into the 21st Century

By: Stephen Marsh There has been a lot of talk about having more meat, more depth, yet not excluding people nor rendering church publications less accessible.  So, why not have an expanded version of the Ensign on-line to provide more depth, and to have an on-line presence worthy of the modern world? 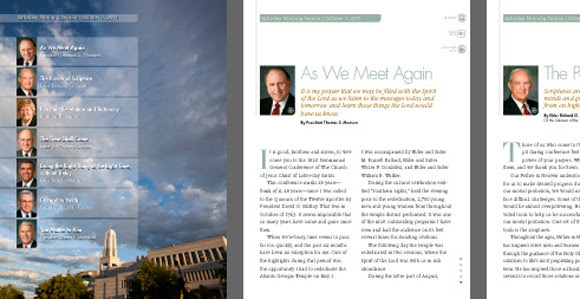 After all, the church is working on an app, at least one for tablets, if not phones.  So starting with that, not just an app for the same content, but what if there was real meat put on-line to expand the Ensign every month, to make real use of the potential of an on-line venue?
If there was, I’d suggest that the following things could go in the on-line addition to expand the material that is in the print edition, and to provide substance — six things:
What would you like to have added to the Ensign on a monthly basis — especially if page count was no longer an issue (as would be the case with an on-line edition)?
Do you think the idea of more depth, in a centralized location, is a good idea to draw people into a deeper approach to the gospel or do you think it wouldn’t be worth the effort?
Would you submit an article if there was a broader and deeper Ensign available?
Posted by Stephen at 6:18 PM 1 comment:

In the World You Shall Have Tribulation

But I don’t think God gives us trials. He doesn’t have to. This life is set up that we will naturally encounter plenty without needing any extra helpings from Him.


Read the entire article.  Just click on the linked text to get there.

We need to remember that life is not about comfort, and conversion is not about ease (link to another great essay).

Ok, I believe in limits, and my donations are not your donations, but if you wonder what I think is worth donating to this week ...


Otherwise, see my Wheat and Tares blog post on limits and living with them as they relate to the personal themes of religious leaders.

Robin, I miss you.

Robin, I miss you. There is no place on earth I can find heaven.
Posted by Stephen at 7:59 AM 1 comment:

That is a message to myself.  I've just survived another 4th of July, another year of transposed emotions and dates.  Another year without Robin.  Closing on another anniversary of when I started what is now called a blog in September of 1997.

I've decided to rededicate myself to not being cranky.  To giving people the benefit of the doubt and following the advice to "stop it" from conference.

This topic of judging others could actually be taught in a two word sermon," he said. "When it comes to hating, gossiping, ignoring,ridiculing, holding grudges or wanting to cause harm — please apply the following: Stop it!"


That is good advice.

I used to read Alma, Chapter 5, and apply it to myself.  It is a grand and glorious call to repentance.

Most recently I've had call to reflect how each of us is both like Nephi and like his brother Lemuel.

Actually, the other one says something that might have been perfectly true and honest:
“The Lord maketh no such thing known to us.”

If Nephi and Lehi assumed everyone could have a vision like the ones they had, and if Laman and Lemuel simply weren’t visionary people (like the VAST majority of people who have lived and live now) . . .

We judge people so easily when we have so little information from which to reach our conclusions. I have had some amazing spiritual experiences, but, to this point in my life, I also can say honestly that, “The Lord (so far) maketh no such thing known unto me (in that manner).” Therefore, I would say I’m a combination of Nephi and Laman in a very real way.


That is well worth pondering.

I don't have advice for anyone else right now, just myself.

I need to take today, take the gift of another year, and do something good, something kind, something patient.  I need not to return harshness, but to seek Christ again, to turn my heart.

I have a long way to go.  I'm afraid that I have not made the progress I should have made, but I hope that I can, this year, embrace the advice to just stop it and instead embrace life.

But I am grateful for another year.

Misc. Comments about FARMS, etc., from around the Bloggernacle

My response was eaten by the spam filter, eventually released (thanks guys!).

All I said was that I generally agree with the author of the essay, but because such appeals tend to get lost in the background noise.  Otherwise, I was lost by the comment that  http://www.followtheprophet.net/ is beyond the pale and "King Put" references.  I feel as if I'm in a different world.


Guest Post: Why I Find Developments at the Maxwell Institute Concerning

The comments are as interesting as the essay, though not, in all cases, as thoughtful or respectful.


The Odd Couple: Story and Community

Roslyn Welch is an interesting writer.   Many of the comments seem to miss the point.  The level of hostility is interesting.


What the heck is going on with the Maxwell Institute?


A series of essays addressing the Maxwell Institute/FARMS.  The author sides with those who fired Peterson, but provides a lot of information.


On anti-LDS/Mormon prejudice in academic circles and how well accepted it is.  I think it is important for understanding FARMS reception outside of LDS circles.

Finally, revisiting Nibley, in context and out of context. Part of the problem with the essay is how hostile it is to many people's citations to Nibley.  That rubs off, I think without meaning to, on all sorts of things as the comments show.

Still: "Nibley himself pointed to the constant need for reappraisal of academic work" -- including his own.  The "post was about the (ab)use of Nibley, not Nibley himself or his work."  I think most of the fire the post draws comes from the title of the post.

That is my round-up for the week.  I mention Nibley because FARMS, in part, started with copies of essays of Nibley's that had gone out of print, including the unmatched Bird Island essay.