What could be better than economics and comic books

Most recently, "Kal-El (formerly Superman) is having trouble negotiating a peaceful resolution to a very dangerous hostage situation. Members of the planet's labor guild have"

In fact, the labor guild likely adheres to the social code for one or all of three reasons:

1) Civic duty or a utilitarianism
2) Deep sense of Kryptonian tradition
3) Self-interest: they work in exchange for the right to be citizens, to enjoy the planets public resources (the only one I can think of is pretty crystals), and to be protected by the military guild

As is this, from a series of comic strips about someone trying to find a church (click on it for more):

Ok, I understand why the CAFE standard changes (myself, I'd raise the price of gas by $2.50 a gallon instead -- $.50 to the highway fund, $1.00 to deficit reduction, $1.00 to social security fund issues) which would result in all sorts of market driven changes. But, if we are going to use the current method, then I want a pledge by everyone who supports them to:

On Club Gitmo, let us just assume that everyone we have in detention is guilty of murder. In most state prisons they would be currently eligible for parole. Will one out of seven return to the bad ways they had before? Without doubt, the number of people on parole who return to a life of crime is higher.

We have to decide if this is a war -- then put them into prisoner of war camps -- or if this is a criminal action, in which case you eventually have to let them go.

Are they dangerous? Of course, but how dangerous? Too dangerous to be allowed out? I doubt any of them count as strategic assets. Cold blooded murderers with a grudge (heck, if I'd been waterboarded over a hundred times, I think I might hold a grudge)? So, there are hundreds of those that go in and out of the prison system every year.

For more on torture, etc.:


Some jokes I heard this morning:

How many bluegrass musicians does it take to replace a lightbulb?

Five. One to hold the ladder, one to switch the bulb and three to complain that it is electric.

What is perfect pitch?

Throwing a [fill in the blank] in the garbage without hitting the rim on the dumpster.

Well, they seemed funny this morning.


Every time I read stories like this one -- L.A. Weekly -- I feel ashamed and feel we should do better. I found myself writing my elected officials again.


Finally, as I told a friend (who posted it to a discussion), with the Chrysler bankruptcy and the secured creditors (one group is selling the other group out in return for government money), every cent of the TARP funds used to leverage the sell-out group belongs in the bankruptcy, under some sort of clawback or other remedy as it is an asset being used on the bankrupt's behalf.
Posted by Stephen at 11:13 AM 1 comment:

I, too, have had students

Last panel, worth a smile. 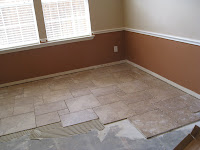 However, here are some pictures of the new house, second update to the paint, with the new tile in progress. The second picture has had the contrast enhanced, it is a four tile size pattern, I really like it.

The rooms just seem bigger with the tile (which took multiple capacity loads in the Tahoe). Win and Heather laid all of it, all I did was run a jackhammer to help take the old thinset out as we pulled tile in the four rooms we tiled. 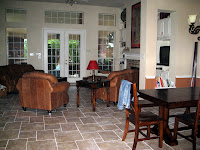 I guess I should note that the increased contrast makes the tiles look a little uneven. In real life the tiles are flat, but it is harder to see the pattern.
Posted by Stephen at 4:55 PM


Resentment and gratitude both have a role in our faith in Christ. Together they teach us a great deal.

Not only is “resentment like taking poison and expecting the other person to die” Christ warned us that if we are wronged and hold on to our resentment instead of giving forgiveness, we would have the greater sin. Compared to anything that can be done to us, resentment is a greater sin.

Because by holding on to resentment we deny that Christ can heal us and we deny that God’s judgment of others will be sufficient. With that denial we repudiate Christ and we exercise a sort of anti-faith. Resentment, at its core, refuses redemption.

Now for a true story. There was a BYU married ward that had a tradition of telling funny stories in priesthood and relief society. That evolved into telling stories about the stupid things spouses did. Which morphed into people trying to top each other each week with stories of their spouse’s stupidity or failings. Which led to young couples spending each week looking for, framing, embellishing, and provoking bad behavior for the week’s stories.

Things got very bad and very intense. Everyone’s focus was on negatives and resentments until a member of the board of trustees intervened.

In your own life, consider what you might do if beyond keeping the monthly fast and testimony meeting in mind you also prepared each day to have a conversation with God about what you were grateful for that day. If you turned from irritations to being mindful of Christ i nyour life.

If you always remembered him.

You would have his Spirit to be with you.